Undying Beta v3.5 playbooks and moves updated to include fan feedback and my editor’s comments!

This is my last planned beta update before final game release. I’m making slow, but steady progress towards completion and Drake is about half-way through the illustrations.

Check out Kirk Mitchell’s layout of the Devil playbook! 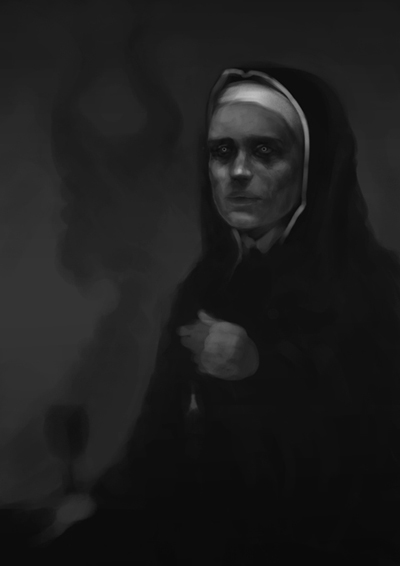 Undying now has its own Facebook page and Google+ community, in addition to this blog and a small presence on the Story Games forum. Thank you all for supporting Undying as I work to transform the game into a no-kidding published book!

Artwork for the published version of Undying is rolling out, thanks to the brilliant artist, Drake Kaiser! These are Drake’s draft sketches for Undying: they speak for themselves. 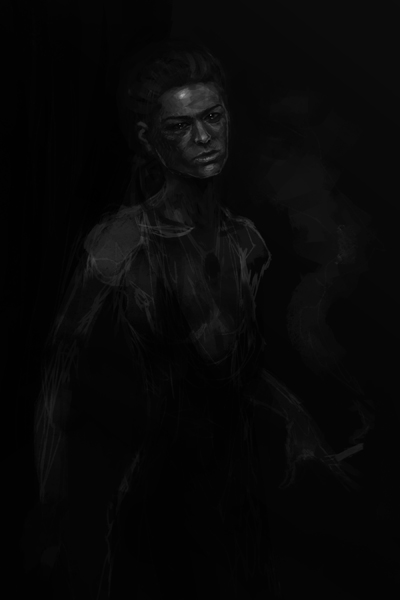 If that’s not enough, take a look at Drake’s portfolio!

Undying and the Regiment at Go Play Northwest

Last weekend was a big weekend for both Undying and the Regiment at Go Play Northwest, a cozy roleplaying convention in Seattle, Washington. I ran Undying twice and had a blast! A friend of mine ran the Regiment: Colonial Marines for us for her first con game. She did a great job! We failed the mission; but, saved our own hides, so you know, just another day in the Corps. John Aegard’s Mission Boston playset for the Regiment was a big hit! I think he ran it twice. We’re blown away by what a great job Johnzo did!

A bunch of folks asked me about Undying and the Regiment, thank you all very much for your interest! For the Regiment, there’s not a lot to say right now. The version 2.x series is stable and needs to be wrapped up. John Harper and I are scheming on version 3; but, I don’t think either of us are planning to tackle that until Undying wraps up. The game design for Undying is finished. John is working on some edits and Krik Mitchell is starting to brainstorm the layout. So, that’s coming along.

Undying has been revised after further playtesting and a new version is now available! With the text done, or hopefully very close, I plan to move toward a kickstarter for a print run! I’ve got a top notch team lined up for art, layout, and kickstart goodies.

I’ll be at GPNW this weekend with Undying. I don’t have any specific plans, for running it yet; but, you’re welcome to hunt me down at the Con or post something here, on FB, or G+ if you’re interested in playing. Hope to see you there!

Mission Boston is the tale of a stick of US 508th Parachute Infantry Regiment paratroopers dropping way off target in  on the morning of June 6, 1944 — D-Day.

The draft is in alpha playtest state, designed for the Regiment v2.1 WWII edition. The playset is well put together and it looks like I’ll get to playtest it next week!

Got feedback from my editor and going through that now. I’ll post an update to the text and playbooks once I get through the revision process. Next, layout!

Also, I’m looking for art and artists. If you know someone whose art you think fits with Undying’s theme, please share!

A couple of playtest groups posted their Undying hangouts! These games are great! Aaron and Brendan really know what they’re doing.

Good examples of the meddle move in action at 54 minutes and 1:48.

The start to this game is by the book. Brendan establishes predator lore, introduces the relationship map, and covers the playbooks.

Also, I updated the basic moves to be more concise.

After chatting with John and Sage last night, I tweaked the play sheets a bit more. I’m pretty happy with Meddle now and I made some other, small wording changes.

[Undying] Meddle – a Quarrel among Predators

These are excerpts from our playtest sessions. John is the GM, I’m playing Miklos, and Shannon’s playing Danira.

PC Meddles with a NPC

Danira catches sight of Ilya, a predator belonging to Mikhail’s pack, a rival. Ilya turns tail and runs. Danira and her pack mate, Luikwei, give chase; but, Ilya is elusive – always a step ahead. They catch the flash of her long, black hair as she rounds the next corner or the splash of a puddle just out of sight. They’re falling behind. Danira tells Lukwei to split up and continue the chase as Danira transforms herself into a bat and takes flight. They spot Ilya on the roof. Lukwei pushes herself to close the gap while Danira heads her off. Danira transforms herself back and pounces around the corner at the running foot falls only to find it’s a flustered Lukwei. Ilya’s scent is still heavy on the cool night air; she’s somewhere close. But Ilya’s is not the only predator’s scent on the night air…

Ilya’s on the ball and starts running. She’ll get away unless Danira intervenes. So, Danira meddles, spending blood escalating to catch up. The GM could relent and let Danira catch Ilya or the GM could escalate by spending more blood than Danira to widen the gap. The GM escalates by spending blood and Danira starts to lose her quarry. Danira could either relent or escalate further. Wanting to catch up, Danira escalates. The GM spends blood for Lukwei to help Danira continue the chase and Danira transforms to and from a bat with the Shapeshifting move from her Wolf playbook at no blood cost. The GM escalates yet again; but, Danira decides the price is too high. That doesn’t mean Danira leaves empty handed, though. She just spent several blood chasing Ilya across the barrens of Paris. Ilya’s out of blood and has been leading Danira to Mikhail’s hideout all the while. So, Danira gets close and she knows it.

PC Meddles with a PC

Miklos overhears a pack of predators on the prowl. With a look, he forces is will into his blood slave, Janet, and takes possession of her to spy on them. Danira catches the scent of prey and she and her pack fall on Janet. Fangs bared, ready to feed, Danira stops short with a frightening memory from her past – the mark of Miklos’ property, which appears suddenly on Janet’s neck in a crimson trace. Janet’s young, frightened, human eyes turn cold, dead, and ancient as she meets Danira’s startled gaze. Miklos relishes the moment. Then Miklos introduces himself to Danira, reminding her of their past. She backs away, slowly.

Miklos makes the blood slave move and the GM spends one of Janet’s blood for possession. The GM offers Miklos the opportunity to meddle with Danira to keep Janet’s presence hidden, Miklos declines. Janet’s proximity draws Danira’s attention. Danira needn’t make the hunting move to pounce on prey already established within her grasp. So, Danira makes the feeding move. To stop her, Miklos meddles. Miklos escalates by spending blood, narrating that the sigil of his ownership of Janet appears on her neck. Miklos makes it clear that he just wants Danira to back off. Danira decides it isn’t worth it to escalate or even counter, so she relents. Miklos gets his way and Danira backs off, as established.

The move meddle is based on poker. You bid around the table, starting with the player making the move. The order around the table can either be sequential, like poker, or you can go around in narrative order based on who is acting. Predators can join in or drop out at different points in the fray and take or change sides as the situation develops. Follow the fiction to determine what makes sense. Each time someone escalates, counters, or relents, they say what they’re doing. At the end of the move, there’s either a tie for most blood spent or there’s a clear winner. If there’s a tie, there’s a compromise, a concession, or a stalemate. If there’s a clear winner, they stand to gain and the rest stand to lose something. What is gained or lost should naturally progress from the fiction already established in the move.

Also, in these examples, baked into the narration of the meddle move, is the use of the move supernatural: the inhuman speed, strength, and toughness and the blood magic too. In meddle, you escalate and counter by spending blood; but, that blood is spent doing something in the fiction. The move supernatural is a good place to start for ideas and other moves can be used within meddle too.

It’s only when meddle escalates to life or death violence that you need to break out of the meddle move to use the fight move instead. If this happens, take the blood already spent in meddle forward to the fight move.